Posted on February 1, 2018 by philmansell

Really pleased to have received confirmation from my publisher Stage Scripts that my play ‘Bats’ will be staged for the first time ever by Newtown Amateur Dramatic Society at the Powys Theatre from 5th-10th February 2018.

‘Bats’ is a black comedy set in a quiet cul-de-sac, where a couple find their nice, quiet orderly lives disturbed by an infestation of bats. A string of people turn up and are mistaken for the bat exterminator. When he finally does turn up, his work is interrupted by a birthday strippergram, and by the time he gets down to busines, it looks like it might be too late… 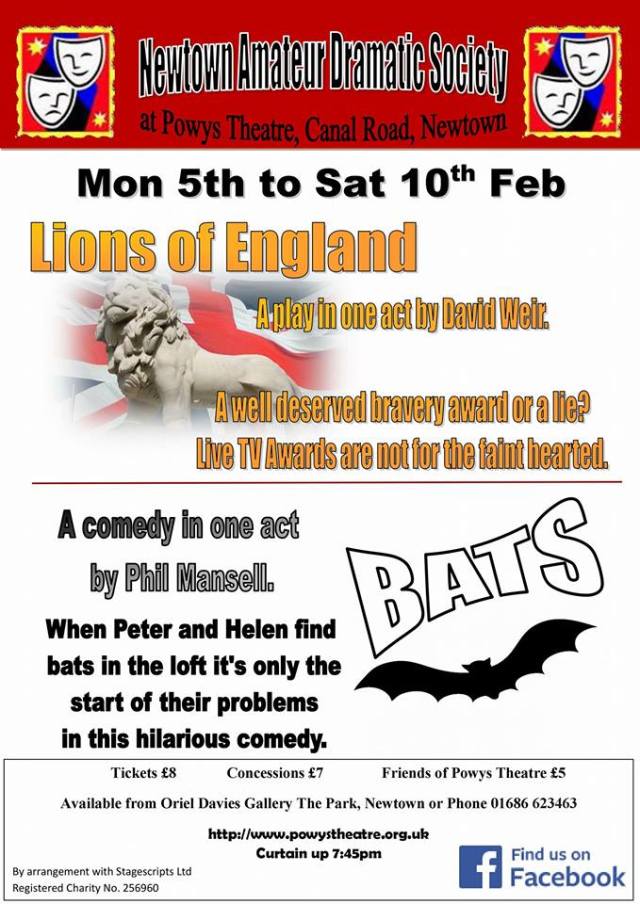 I'm a writer, photographer, illustrator and film-maker with a Masters degree in Multimedia & Information Design from the University of Wales, Newport. I'm also volunteer PR Officer with Newport Playgoers Society who own and run the city's 400-seater Dolman Theatre. I trained at the London Film School where I specialised in script-writing, directing and animation, and had three films screened at the National Film Theatre. After teaching film-making, photography and art, I moved into the world of advertising and PR and was a professional writer. My play 'According to Claudia' was selected by Newport Playgoers Society to launch their 92nd season. It won the Award for Theatre Show of the Year 2014 presented by lifestyle and entertainment magazine Voice. It has since been published by Silvermoon Publications and is available from Amazon. Other plays I have had published include 'Poor Yorick', 'Bunkered' and 'Caddying for Godot'. Previously my one act play 'Poor Yorick' was a winning entry in a competition run as part of the Royal Shakespeare Company’s Open Stages project and was performed at both the 400-seat Dolman Theatre and Blackwood Little Theatre. Another play, 'Bunkered', was one of the winning entries in a competition judged by Welsh playwright Frank Vickery.
View all posts by philmansell →
This entry was posted in Uncategorized and tagged amateur theatre, Bats by Phil Mansell, drama, Phil Mansell, stage play, Stage Scripts, theatre. Bookmark the permalink.

1 Response to Premiere of ‘Bats’