Posted on November 4, 2021 by philmansell

I was recently asked by Bob James of Valley FM to go on his Sunday morning programme and talk about my latest children’s books. As these included illustrating Fiona Jennison’s new book ‘Tiny Teeth and Magical Creatures’ we were both interviewed. Bob kindly gave me a recording of the interview and I’ve posted it on YouTube in three bite-sized chunks. Here’s a link to part one – the other two parts can be found on my YouTube channel.

Please check out my latest video on my YouTube channel:

Press Release: ‘Bats’ Is A Hat-Trick For Playwright Phil

Rehearsals are well underway for Jávea Players’ latest production, Bats, which is the third play they have staged written by their resident playwright Phil Mansell. It will be presented at Jávea’s Casa de Cultura following a delicious tapas meal at the nearby Bar Imperial.

Phil is also directing the play, a dark comedy set in a house where an ever-growing colony of bats has set up home in the loft. The council’s bat expert is expected any minute, but the man of the house mistakenly welcomes in a succession of unlikely people who come to the door.

“I wrote this play a few years ago and have extensively rewritten it for its Spanish premiere,” said Phil who has introduced a new character in the form of a nosy neighbour. “I’ve been lucky to find a very talented cast and we’re having a lot of fun at rehearsals.”

Phil has previously directed two other of his plays for Jávea Players – Poor Yorick, an alternative telling of Hamlet, and the 1950s amateur detective spoof Look Out – He’s Got A Gun! They both proved very popular and played to sell-out audiences.

Bats is one of 12 plays Phil has had published and it has been performed far and near, from Powys in Wales to Sointula in Canada.

Bats will be performed from 28th June – 5th July (excluding Sunday) at the Casa de Cultura in Jávea following a tapas supper at the Bar Imperial. For more information and to book tickets visit www.javeaplayers.com.

Another Production of ‘Look Out – He’s Got A Gun!’

I’m pleased to say that a drama group in Cornwall will be presenting my spoof thriller ‘Look Out – He’s Got A Gun!’ later this month.

I found out when a member of the cast very kindly wrote to me asking for tips on how to play her character. I wish St Erth Players all the best and hope they have as much fun with the play as my cast did when I directed the preniere performance back in December 2019.

Broken legs all round!

I’m pleased to announce that I will be directing my play ‘Bats’ for the Jávea Players’ summer show at the Casa de Cultura in the heart of the old town. Further information on the poster below.

Posted on December 2, 2021 by philmansell

I’ve recently added some more books to those I’ve published on Amazon. Please check them out.

Posted in Uncategorized | Tagged children's books, Mrs McBee's Multicoloured Knees, new writing, Phil Mansell, The Great Fish and Chips Robbery, What Do Pirates Have For Breakfast?, Where Do Pirates Go For A Picnic?, Writing and Illustrating | Leave a comment

Inspired by Fish and Chips!

Posted on November 6, 2021 by philmansell

For my latest children’s book I went back to my childhood in the back streets of Birmingham. I remembered going to buy my family’s fish and chip supper on a frosty autumn Friday night and queuing outside the shop with friends and neighbours. Because everyone went to the chippie on a Friday night.

The first thing I came up with was the title and then I imagined what would happen if I – and everyone else – was being robbed of my precious hot newspaper parcel (fish and chips were always wrapped in newspaper in those far-off days). Who were the robbers? It had to be two hooligan brothers from the Rough End of our street. They were wearing masks and armed with powerful water pistols. When I refused to hand over my fish and chips I was squirted in the face.

I needed someone to help me track down the thieves and created a clever schoolfriend called Anita. She is smarter than me and decides the best thing to do is to look for clues. Her keen eyes spot a trail of hot chips leading through the dark and dingy back alleyways. We follow the trail…

What we find is a regular thieves kitchen in the ramshackle house of the Rotter family. How do we get my fish and chips back? You’ll have to read the book to find out.

Like many of the books I publish on Amazon this was originally in a letter I wrote for my two grandchildren, Maddy and Max. If they enjoy my stories I turn them into books. It’s not the first time I’ve plundered my childhood for story ideas and I’m sure it won’t be the last.

To order ‘The Great Fish and Chips Robbery’ and the rest of my books on Amazon go to my Author’s Page.

‘Look Out – He’s Got A Gun’ Published

I’m pleased to announce that my play ‘Look Out – He’s Got A Gun! is to be published and represented by Stage Scripts Ltd.

It becomes my 12th play published by the company which represents playwrights and their work worldwide.

‘Look Out’ is a fast-paced spoof crime thriller in which a husband and wife team are called in by a baffled Scotland yard to solve a series of mysterious kidnappings. Inspired by British films and radio serials of the 1950s, the play premiered at the Jávea Players’ Studio Theatre in December 2019 and starred a cast of talented JP stalwarts who tackled a variety of challenging roles including a crooked American, a deranged inventor and a sexy Spanish singer. The play was sold out and received very favourable reviews.

When I was taking the publicity photos for the production I planned to shoot a promotional video. Unfortunately, I was struck down by the effects of some new medication I’d been given which totally knocked me for six. I was unable to shoot the film but I have put what I did shoot into a trailer for the newly published play. It’s now available here and on Youtube.

‘Look Out – He’s Got A Gun!’ is also available as a novel on Amazon. Click here to go my author’s page on Stage Scripts. Click on the image below to view the trailer on YouTube:https://youtu.be/yYmxGdUwhW8 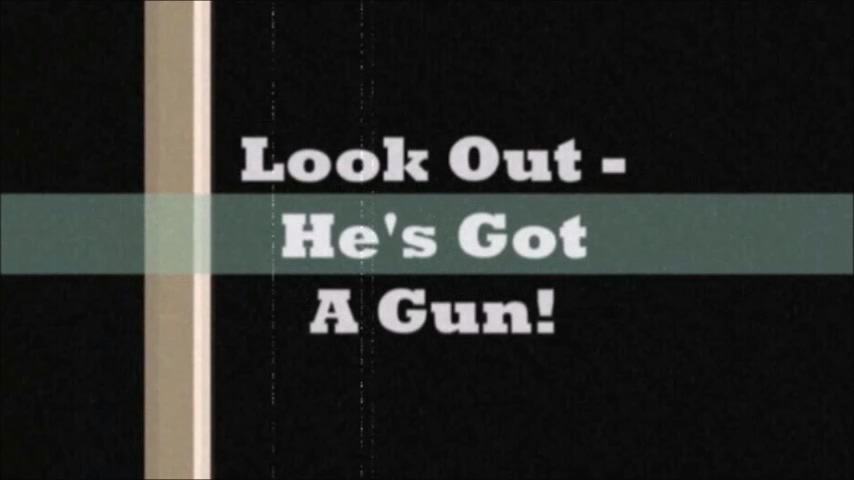 The Lockdown here in Spain is thankfully coming to an end. While I’ve been confined to quarters I’ve taken the opportunity to learn some new skills and try to produce examples of “virtual theatre”, based on plays I’ve written, such as Some Enchanted Evening  and Fool’s Errand.

I’ve just posted another short animation video on my YouTube channel. Based on a poem I wrote back in the mid-70s, this was created using two new (free) programs I’ve recently discovered.

Mediabang Pro is a painting program that I found easy to use and which produced good results.  You can download it here.

Opentoonz is an open source animation program. Originally called Toonz, it’s the software used to create Studio Ghibli films like Spirited Away and the popular TV show Futurama. It’s open source and free for any budding animator to download and use. Here’s the link to the download page.

I may well create a video showing how I made my new video Shore Lines  which can be viewed below or via this link.

Proof That Writing Is Never Wasted

As a writer, I’ve always believed that everything one produces is of some value. All writing has merit, if only to take you a little nearer your goal of producing something you’ll be proud of. Every time we write we learn from the experience – if it’s only that maybe that’s not the best way to do it.

This was illustrated recently when, in lockdown here in Spain, I needed to find something that could be adapted as a recorded reading to go on the website of amdram group Jávea Players. The aim is to keep our members entertained at a time when producing plays onstage is obviously not possible. Some people are posting videos of themselves reading stories or monologues. I wanted to do some of my own work so delved into the folder containing all my old writing and re-discovered an abandoned play that I’d written back in 2003 entitled Some Enchanted Evening. 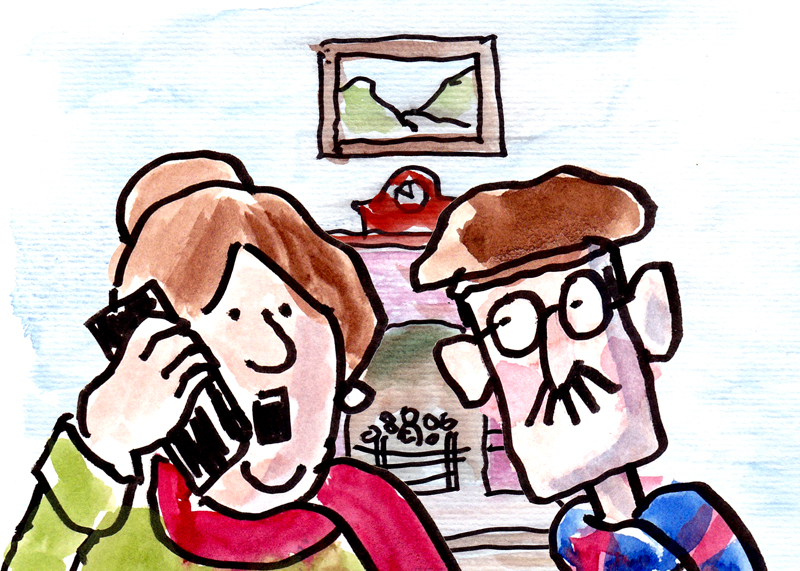 This was a quirky surreal comedy about a couple – Sam and Janet Evening – who return home from the pub quiz to find everything in their bungalow is not as they’d left it. There had been a break-in but nothing had been taken – except for some chocolate Hobnob biscuits. The television was on, showing a marathon session of snooker. It all pointed to the fact that the intruder had sat and watched the snooker on television while eating the aforementioned biscuits.

The play went on to introduce a zoo-keeper and a mysterious cyclist called Nigel who has a habit of abandoning bicycles in the fireplace of the bungalow. However, the opening scene was all that I needed for the lockdown project. I had written the play in several forms for various media – stage, radio and TV. All useful writing exercises. I adapted the version for radio as I originally envisaged it being an audio file. Once my wife, Caroline and I had recorded it, however, I saw other possibilities – a video illustrated with cartoons of the characters. And that’s how it turned out.

I never imagined that this play that I wrote so long ago would ever see the light of day again – let alone that I would end up supplying the voice of Sam!

I had written it, enjoyed the experience and moved on to other projects. Yet here it is today – resurrected as a short film. Proving that old, abandoned writing has its uses. So never throw that old stuff away. You never know when you may need it.

Some Enchanted Evening can be viewed here on YouTube. And here’s my blog about how I came to write it.