‘Claudia’ Goes from Strength to Strength!

I’ve been so busy lately that I haven’t had a chance to update this blog so I’m desperately trying to catch up now.

The good news is that not only did my play ‘According to Claudia’ have a successful run at the Dolman Theatre in September but I have also found a publisher for this and the rest of my plays – and won an award!

Last night my wife Caroline and I were presented with the award for Best Theatre Show of 2014 by lifestyle and entertainment magazine Voice in the plush surroundings of the Celtic Manor Resort. 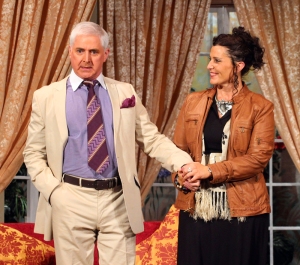 It was a shame none of the wonderful cast of the play who helped make it such a success were able to be there to share in our joy. But the award is very much a shared one as they played such a vital part in bringing my characters to life – and Caroline, who directed the play, and I want to thank them so much for all their hard work and patience. 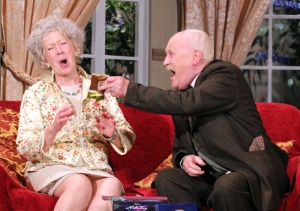 Prior to the award I signed up with Silvermoon Publishing which specialises in providing plays for hundreds of dramatic companies worldwide. My first play to go into print will be ‘According to Claudia’, which launched the new season by Newport Playgoers at the 400-seat Dolman Theatre in September. 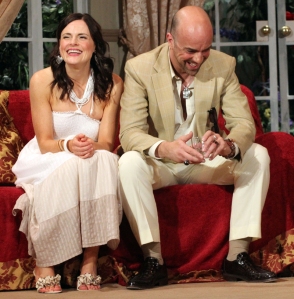 I’ve been writing plays for many years and Silvermoon Publishing want to create a catalogue of my work which they will promote to potential performers including over a thousand contacts they have who are looking for plays.

Very few authors make a fortune from their plays but I will have the satisfaction of knowing that there’s a good chance my work will be staged, not only in this country but across the world.

As well as ‘According to Claudia’, I have several plays lined up for Silvermoon including ‘Poor Yorick’ and ‘Bunkered’ both of which won one act play competitions and were staged at the Dolman Theatre. I have also recently completed two plays, one of which is about the ghost of John Lennon striking up an unlikely relationship with a retired quantity surveyor.

I'm a writer, photographer, illustrator and film-maker with a Masters degree in Multimedia & Information Design from the University of Wales, Newport. I'm also volunteer PR Officer with Newport Playgoers Society who own and run the city's 400-seater Dolman Theatre. I trained at the London Film School where I specialised in script-writing, directing and animation, and had three films screened at the National Film Theatre. After teaching film-making, photography and art, I moved into the world of advertising and PR and was a professional writer. My play 'According to Claudia' was selected by Newport Playgoers Society to launch their 92nd season. It won the Award for Theatre Show of the Year 2014 presented by lifestyle and entertainment magazine Voice. It has since been published by Silvermoon Publications and is available from Amazon. Other plays I have had published include 'Poor Yorick', 'Bunkered' and 'Caddying for Godot'. Previously my one act play 'Poor Yorick' was a winning entry in a competition run as part of the Royal Shakespeare Company’s Open Stages project and was performed at both the 400-seat Dolman Theatre and Blackwood Little Theatre. Another play, 'Bunkered', was one of the winning entries in a competition judged by Welsh playwright Frank Vickery.
View all posts by philmansell →
This entry was posted in Uncategorized and tagged According To Claudia, amateur theatre, amdram, Award-winner, Dolman Theatre, drama, new writing, Newport Playgoers, Phil Mansell, playwright, script, Silvermoon Publishing, stage, stage play, V Awards, Voice magazine, writing and re-writing. Bookmark the permalink.